I am mailing the following letter to B.C.'s premier, two cabinet ministers, and Adam Olson as I believe this issue cuts to the core of our relationship with Indigenous peoples and sets the direction of the future of British Columbia. Are we really prepared to leave behind our colonial past, or do so in words only?

Feel free to also mail your version (or a copy of) this letter. The more people that actually snail mail the government the more likely their words will be put into action. I am grateful that a retired journalist and a member of the Anglican church in Nelson took the time to research and write this letter. 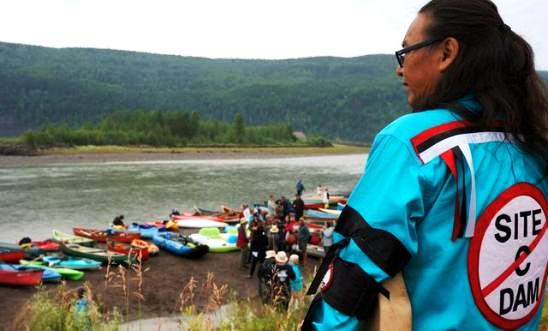 RE: BC Declaration on the Rights of Indigenous Peoples Act

I was pleased to note from the government website

https://www2.gov.bc.ca/gov/content/governments/indigenous-people/new-relationship/frequently-asked-questions-the-united-nations-declaration-on-the-rights-of-indigenous-peoples that implementing the UN Declaration of the Rights of Indigenous Peoples  in B.C. is about ending discrimination, upholding basic human rights and ensuring more economic justice and fairness.

Given your government’s stated willingness to implement this Declaration, I would like to draw your attention to two issues: that of the construction of the Site C Dam and the expansion of the Trans Mountain pipeline.
1) In 2014, you stated in a filmed interview that First Nations in the Peace region of the Site C Dam had entrenched constitutional rights that were “going to be violated by this dam.” However, on December 11, 2017, your government announced its decision to complete the dam. Following six months of confidential talks with the B.C. government and BC Hydro aimed at avoiding litigation, the West Moberly First Nations has announced it will proceed with a Site C dam court challenge, saying it infringes on their treaty rights. Apparently, the talks went nowhere.
2) Indigenous groups involved in the court challenge against Trans Mountain are the Tsleil-Waututh and Squamish Nations in Metro Vancouver, the Coldwater Indian Band in Merritt and a coalition of First Nations in the Fraser Valley. Although the court has ruled that upcoming arguments can only focus on whether the latest round of Indigenous consultation was adequate., the Tsleil-Waututh and three environmental groups sought leave to appeal that ruling in the Supreme Court of Canada, claiming the Federal Court was wrong to refuse to hear arguments about the risk of an oil spill or threats to endangered southern killer whales.

Lastly, when the United Nations Declaration on the Rights of Indigenous Peoples was adopted in 2007, it introduced the right to Free, Prior and Informed Consent for Indigenous Peoples. FPIC is one of the fundamental aspects of the UN Declaration and is included in six Articles.  While all six Articles are significant, Article 32.1 is of particular interest to the extractive resource sector in Canada:

Article 32.1
States shall consult and cooperate in good faith with the indigenous peoples concerned through their own representative institutions in order to obtain their free and informed consent prior to the approval of any project affecting their lands or territories and other resources, particularly in connection with the development, utilization or exploitation of mineral, water or other resources.

If the government of BC is indeed implementing this Declaration, how is it that we are continuing to build the Site C Dam and the expansion of the Trans Mountain pipeline?
Is this not duplicitous on the part of the government? Are you not aware that the United Nations and Amnesty International have called on Canada to stop building the Site C dam until proper consultations have taken place and that British Columbia has the authority to stop the dam?

It is not possible to pick and choose. Implementing the Declaration means that Indigenous peoples have the right to free, prior and informed consent regarding any utilization or exploitation of resources, including the building of the Site C Dam and the expansion of the Trans Mountain Pipeline across Indigenous land.

I am considering this issue to be so important for the future of our great province that I have decided to make it a public letter.

I would very much appreciate a reply to this letter. In fairness I will post your reply.