Showing posts with the label speaker
Show all 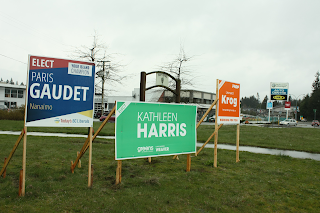 With the election of three Green MLA's last month many hoped that the province of B.C. might experience something of a resurgence in democracy. Greens are known to work with other parties and now hold the balance of power. Ever the strategists the Liberals have decided to not cooperate and hope for more seats in an election that will be called in the near future while blaming the Greens for not supporting them. Here are signs of this strategy:  None of the Liberal MLA's are willing to stand for election as the Speaker of the Legislature, expecting the NDP or Green to provide one, thus creating a very unstable tie vote. This is unusual in the Westminster tradition Christy Clark is currently campaigning in the vote-rich lower mainland, wooing them with promises of improving their transit (finally!) and more Their budget will include many of the policies promised by the Greens and NDP such as more funds for social assistance and an end to corporate donations (which would,
Post a Comment
Read more
More posts