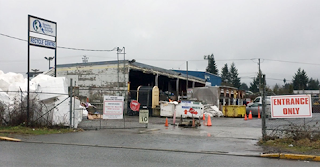 Let’s compare how the corporate non-profit “Regional Recycling” (RR, the more recent brand name for the federally incorporated Encorp) and the Nanaimo Recycling Exchange (NRE) go about their "business."

Firstly, the local RR depots are privately owned. They are licenced by the federally incorporated not-for-profit Encorp.

So how are they funded?

Encorp: Especially in the earlier days, when Encorp's “Return-it” was only a bottle depot, they were given the eco-fees generated whenever someone purchased a bottled beverage. They got to keep 100% of those deposits, even when the container was not given to them for a refund. They amassed large sums of our money ($43 million at its peak). They still get to keep these public funds. In the last year they reported (2016) about three-quarters of all of their income came from the eco-fees charged to us. The rest comes from selling the recyclables and other income.Click here for that information.
The NRE has very little guaranteed funding. It has had to work hard to generate most of their own revenues from second-hand sales and finding buyers for the items they received. The NRE has depended a little for contractual work from the RDN (just as would a company, and made some profit from these). Despite these obstacles the NRE, with its own money, was able to purchase a piece of land that has now increased in value, but has no buildings on it. Because its business plan included receiving items that cost it to recycle ($30,000/year at last count) it was not able to save for the building it otherwise would have been able to self-fund and erect.
There are other differences between the two entities. Unlike publicly traded businesses Encorp does not have to disclose how much pay its directors receive, and has declined to disclose this and the specific amounts paid for any of its separate (privately run!) operations (click for the article here). About 5% ($4.5 million) were spent in 2016 for administration of the corporation (a fair chunk of this would have been paid to their Directors). Their "handling fees" ($53.5 million or 58% of the total) went to their network of independent (for-profit) contractors "such as depot operators, transporters and processors" (see about 2/3's the way down this page). Audited statements are available at the NRE’s AGM’s.
The local RR independent contractor (there was only one outlet in 2016) operated on very roughly $1.9 million in 2016, according to my calculations (Nanaimo recycled 35,600,000 of 1 billion containers in the province and the total given to those operators appears to have been $53.5 million). The NRE operated on just over half of RR's income, or just over $1 million. No wonder the RR looks  more presentable!
So while the NRE as an entity is a non-profit, the local RR depots are privately owned businesses and operate under licence. I have learned that the RR depots have banded together through an association that is putting pressure on the NRE's of the province. And this is only one aspect of the sordid mess called "recycling" in British Columbia.

Encorp’s directors (click here for the list) most likely do not live in Nanaimo. It is a federally registered corporation. Their independent contractors (businesses) do likely live in this area. But the NRE is a local, charitable, community-driven entity run and directed in Nanaimo that is very responsive to the needs of the community, including training non-employable people so that they are less likely ending up on the streets or overdosing. Unlike RR the NRE put a huge amount of effort into Canada's first Zero Waste International conference, held in Nanaimo a few years ago. Nobody from Encorp or their depots attended the event, much less helped it out.
The NRE has led recycling in our region for a quarter of a century; Encorp was handed a golden spoon by the province less than 20 years ago. The NRE has been willing to sacrifice its own future for our sake. It has inspired us to go further so as to avoid building a tax-payer sucking incinerator, and is more visionary.
So, yes, both entities recycle but locally only the NRE is a non-profit.
If the NRE’s building program is funded by local governments, costing us each the equivalent of a few coffees per year for just a few years, the NRE’s new site will to allow it to accept even more items –things that are not currently accepted for recycling anywhere else. Do we wish to move forward or stay stuck? The decision now lays with the City of Nanaimo's councillors.


Isn’t it time we gave back to them so that they can continue to give to us? 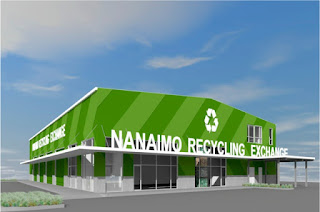